A true hidden gem if there was one. Kinoshita’s vision is involved less with the dropping of the bomb and more with the devastating fallout. Entering a world where every single survivor lost all their loved ones. The pain is unbearable. Powerful movie.

The first Al Pacino and Sidney Lumet film on the list and first collaboration between the two as well. A daunting story of blind justice in the face of great adversity. Pacino embodies Serpico and there are few performances as cool and freaked as this one. A great film about systematic corruption.

“Frank, let’s face it, who can trust a cop that won’t take money?”

A great entry into the Lord of the Rings trilogy and the perfect setup for these characters’ daunting journey ahead. A phenomenal mix of character and plot as an awe-inspiring visual experience. The most intimate of the trilogy with some of the most impactful moments throughout the story.

“You cannot pass! I am a servant of the Secret Fire, wielder of the Flame of Anor. The dark fire will not avail you, Flame of Udun! Go back to the shadow. You shall not pass!”

The most majestic war film ever made. A war film that cares about its characters but as the title implies walk The Thin Red Line towards death. The most striking cinematography that covers the soldiers, civilians, and nature on the island. The ensemble cast is stacked full of wonderful actors that all deliver strong performances in short bursts.

“Why should I be afraid to die? I belong to you. If I go first, I’ll wait for you there, on the other side of the dark waters. Be with me now.” 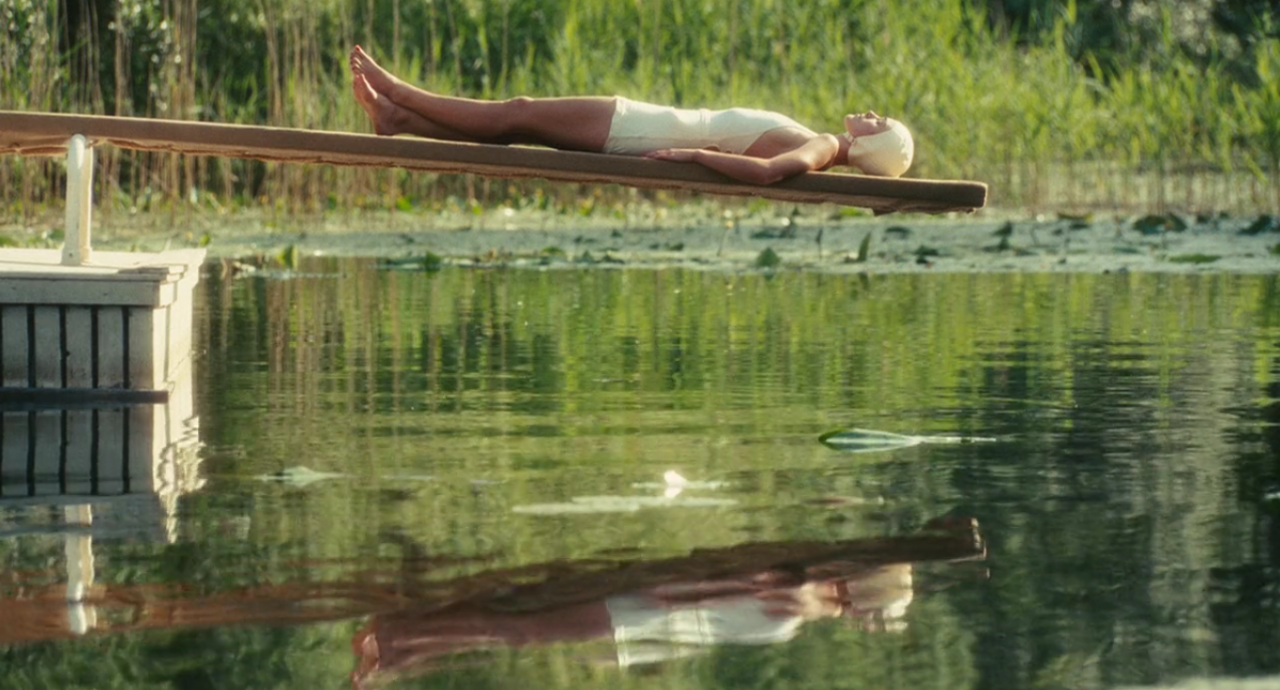 Atonement centers around one little girl’s decision, played feverishly by a young Saoirse Ronan, that changes the fate of almost every person involved. A dour film that spans from simple pre-war life to the treachery of war and the familiar end result for so many young men. Some of the best production design and cinematography of the last two decades and quite possibly Ronan’s career-best performance. A ravishing romance of unconsummated love. 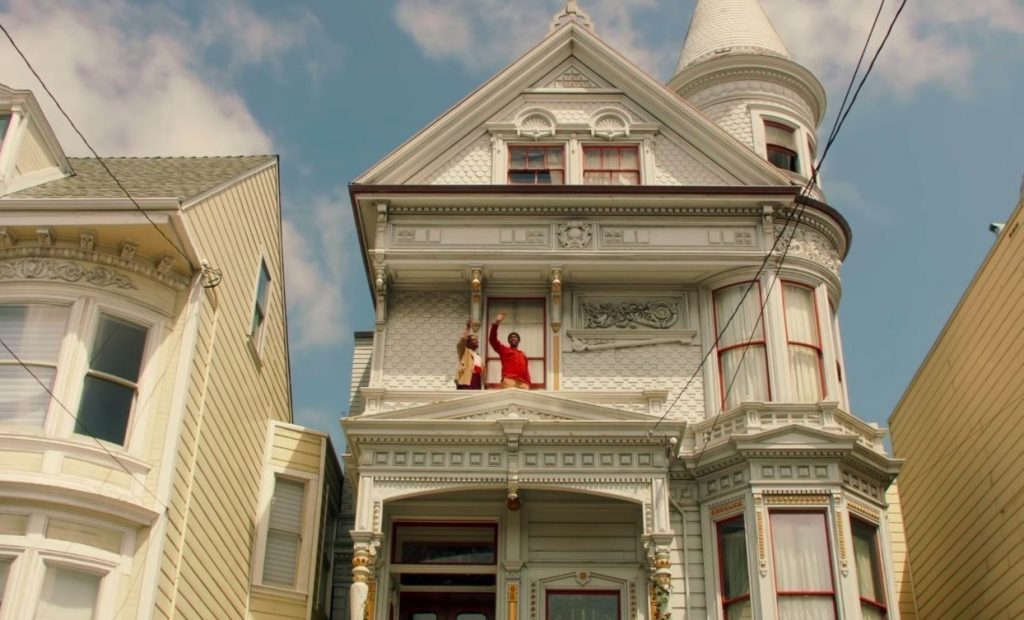 The first entry from 2019 is Joe Talbot’s romance with a city. A love letter to its people and those that are being left behind through the process of gentrification. A beautiful poetic journey about letting go and understanding a changing world. Gorgeously lit, shot, acted, and scored by Emile Mosseri. A one-of-a-kind experience.

A memory piece from Fellini essentially documenting his childhood memories of his beloved seaside Italian village. A joyous piece of cinema with lively characters that captures the essence of being a kid and the fond memories we take into our adult lives. It’s also a story of first, as the boys obsess over Grandisca and explore the world of women. It’s sensationalized in Fellini’s mind, but happiness personified through-and-through. 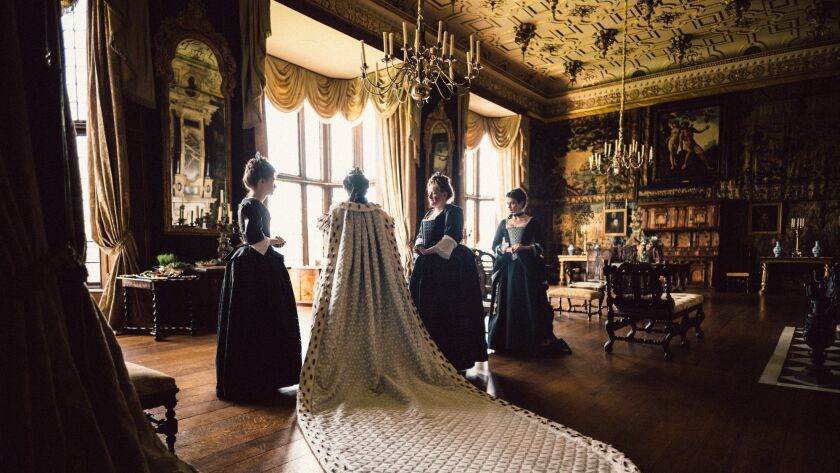 A devilishly clever black comedy on gaining the favor of royalty. How the winds of favor shift rapidly and the antics used to attract. Olivia Colman, Emma Watson, and Rachel Weisz are marvelously cruel and the comeuppance is so well earned for each character. Lanthimos’ direction is also flawless with amazing sound, production, costumes, and cinematography.

“As it turns out, I’m capable of much unpleasantness”

Miyazaki is a mainstay on the 251 as the greatest animated director in the history of the medium. Covering vast worlds full of imagination and Nausicaa is among his best in terms of his world-building. World-building is such a fascinating aspect of crafting a narrative and Miyazaki explores every corner of his stories and makes them so fleshed out. Nausicaa isn’t as character-driven, but still a thrilling experience nonetheless.

Please, dear God, please hear this prayer, you must protect the people of the Valley. 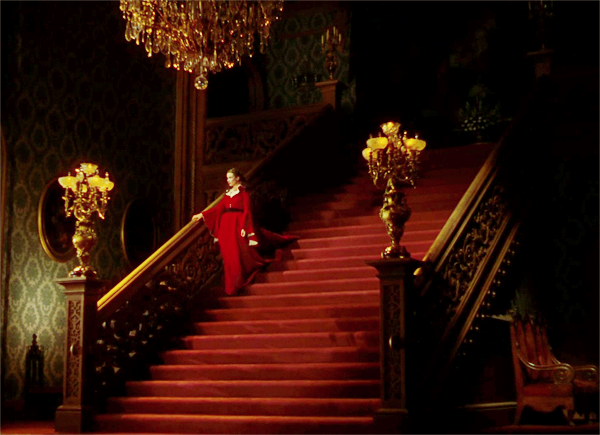 The highest-grossing film of all-time (that will likely always hold that title) is a love letter to the Southern culture during the Civil war and how war (thankfully) forced a progressive change. Based on a wildly popular novel, a film on this grand of a scale was a large undertaking for essentially an independent producer and what Rhett Butler and Vivian Leigh are able to achieve with this well-known material is remarkable. Yes, the film has problematic elements, but the scale of the production is unheard of today. 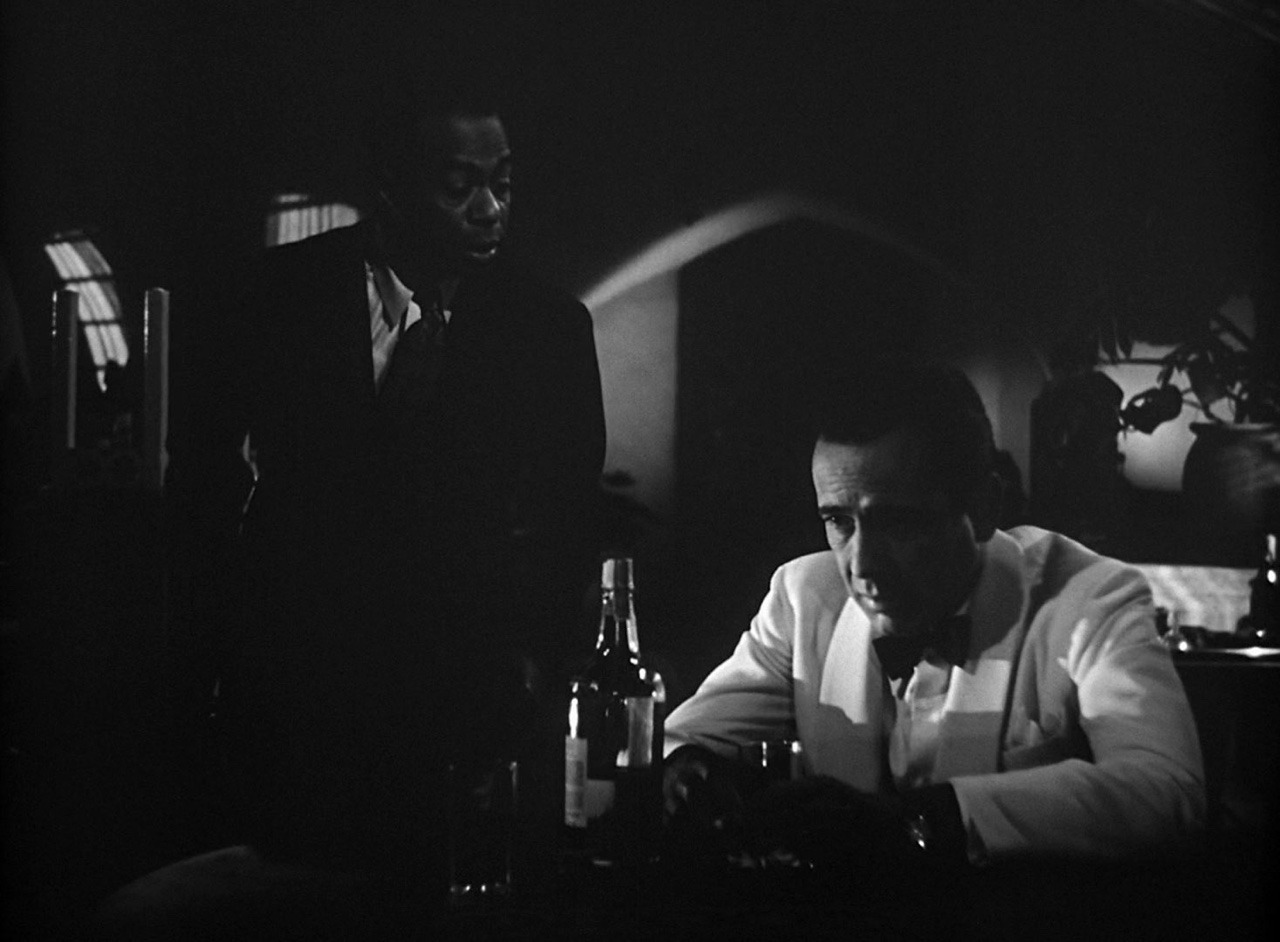 The most iconic film maybe ever made. One that defined the early years of the studio system and became a massive hit. Michael Curtiz, as one of the best directors of the era, created the timeless set of Rick’s Cafe, and one lasting message on harboring refugees in a time of war. A memorable script, tempered performances, and a setting that sticks in your mind. Iconic for a reason. 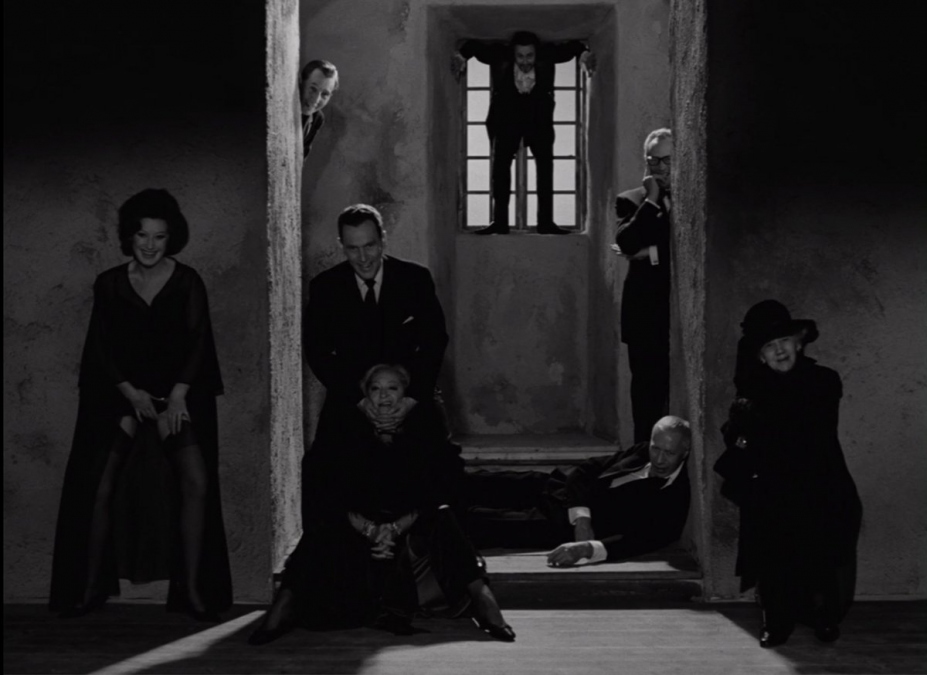 An Ingmar Bergman horror film. Horror explored from humiliation through the artistic endeavor and painful memories throughout his life told during The Hour of the Wolf. One of Bergman’s tightest films in terms of framing and character. Liv Ullman and Max Sydow are great again as the central couple in another Bergman classic. A haunting experience in a unique sense.

“A minute can seem like an eternity. It’s beginning now… ten seconds… Oh, those seconds… how long they last… the minute isn’t up yet… Now it has gone”

Ben Gazzara at his most sleazy and indirect. Cassavetes grimiest in his filmography and yet his most straightforward – it’s The Killing of a Chinese Bookie. This film flows and is edited like none other and ends like none other. A completely surreal narrative but everyday aesthetic. A Cassavetes’s classic.

“That jerk Karl Marx said opium was the… religion of people. I got news for him, it’s money.”

An unconventional police procedural told through a rogue policeman who has lost his way. Starred by the inimitable Toshiro Mifune, Stray Dog shows the slippery slope of power and how the line between justice and crime can be blurred by circumstance. Kurosawa at his most ice cool melted by the heatwave pressure cooker that is Stray Dog

“Bad luck either makes a man or destroys him. Are you gonna let it destroy you? Depending how you take it, bad luck can be a big break.”

The great Polish director Kieslowski’s first entry into the Three Colors trilogy with Juliette Binoche in Three Colors: Blue that follows the death of her beloved husband and young daughter. A personal introspection into grief and how people shield themselves from the world. The overwhelming pain of reaching out when it feels as if there’s nothing left and the path back to her humanity.

“Now I have only one thing left to do: nothing. I don’t want any belongings, any memories. No friends, no love. Those are all traps.”

Mifune playing a stern and wise old doctor shows the dramatic range one of the greatest actors of all-time has in his repertoire. Red Beard shows the power when doctors do what’s best for the sick and poor and the importance of their role within the world. And how the most ideal situation can be the most rewarding. A beautiful message with amazing performances.

“The pain and loneliness of death frighten me. But Dr. Niide looks at it differently. He looks into their hearts as well as their bodies.”

The first mention of the illustrious Russian director pushed that medium with every new release. Solaris is a slow, contemplative experience that digs deep into our subconscious and suppressed memory. An intellectual conversation with ourselves that drives the characters mad. The script is masterful and Tarkovsky’s grand set designs make this a film to remember. It feels different from the very first frame to the last.

“Man was created by Nature in order to explore it. As he approaches Truth he is fated to Knowledge. All the rest is bullshit.”

The family dynamics in Ozu films are completely unmatched by any director throughout history. His immersion into this family’s life in Tokyo Story shows a willingness to listen and understand these people. It truly feels as if we’re experiencing their lives, with all the ups-and-downs and surprises, along with the main characters. Chishu Ryu as the lead character steals the show once again as the aging father, but the entire cast transforms in this film. A poetic journey to the source of a family’s love for one another.

“Yes, indeed. To lose your children is hard, but living with them isn’t always easy either. A real dilemma.” 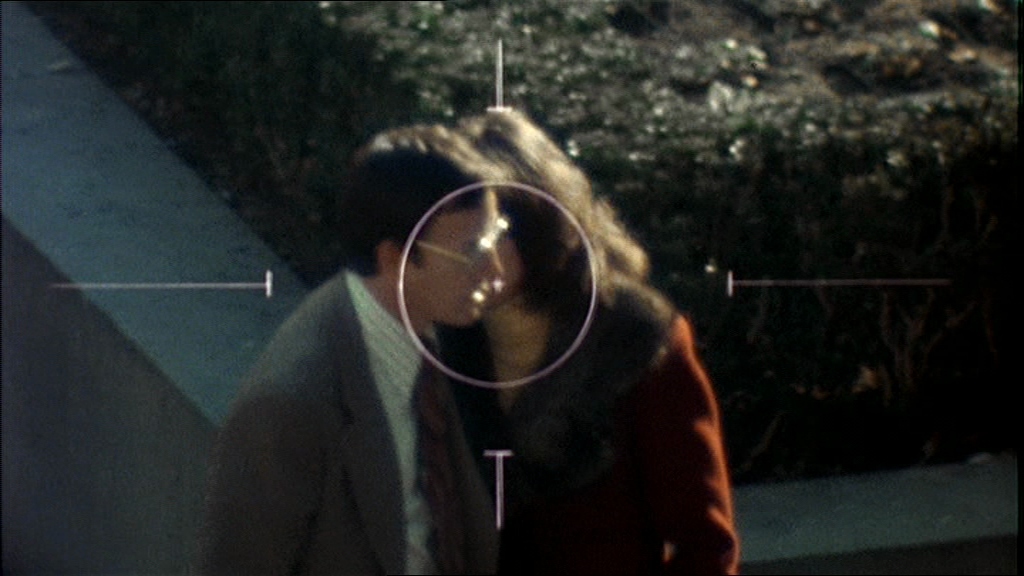 The forgotten Coppola film that rises to the level of his trio of masterpieces. The Conversation is obsessed with its subjects and we get pulled so easily into the mystery through the surveillance style cinematography. The slow-build reveals something traumatic and leads to one of the more shocking endings on the list. Gene Hackman is marvelous but it’s Coppola’s direction is responsible for the overwhelming building tension.

“I’m not following you, I’m looking for you. There’s a big difference.”

A fleeting relationship set to the backdrop of the murder of a policeman. The free-flowing structure of a Godard film, following a person of questionable moral character, try to persuade Jean Seaberg to flee Paris for Italy. It’s sexy and sleek as Godard intended.

Patricia Franchini: What is your greatest ambition in life?

Parvulesco: To become immortal… and then die.

Lee Chang-dong created the most eloquently shot thriller of all-time with Burning. It’s subtlety at its finest, and does a great job insinuating about these characters and leaves the audience to decipher through context clues rather than outright showing. It’s unique in this regard, and that’s a good overall term used to describe this film. Different from any other thriller that I’ve seen.

The story of regular people coming face-to-face with extreme evil. How the pressures of everyday life can drive people to extremes. A hilariously dark Coen script of mediocre people doing extraordinary things as to not be murder by the Russian mafia. Frances McDormand is incredible in the midwestern, small-time cop role

” I’m not sure I agree with you a hundred percent on your police work, there, Lou.”

Twin Peaks is the greatest television show ever made and the one standalone film focusing on the Sarah Palmer murder is Lynch firing on all cylinders. A great addition to the Twin Peaks universe, and the one time we get to see Sheryl Lee become the Sarah Palmer character who defines the show. She’s fantastically nuanced as the much talked about Sarah Palmer. It’s just as weird as anything in the show with even sharper storytelling and a distinct edge to the filmmaking from Lynch.

“Faster and faster. And for a long time you wouldn’t feel anything. And then you’d burst into fire. Forever… And the angel’s wouldn’t help you. Because they’ve all gone away.”

The 2010 wunderkind Damien Chazelle’s true breakthrough film is a pressure cooker with a tour-de-force performance delivered by the maddening JK Simmons. Edge of your seat filmmaking that is engaging from start to the very last frame. And oh god, that ending is just incredible.

There are no two words in the English language more harmful than “good job”.

The quintessential neo-noir sci-fi film. The world-building is sensational, but it’s the mystery behind Deckard and the replicants that have made this a timeless classic. From top to bottom, Ridley’s direction is outstanding, from adapting Philip K. Dick’s novel, to the all-time great Vangelis score, it all is done at the top of the craft.